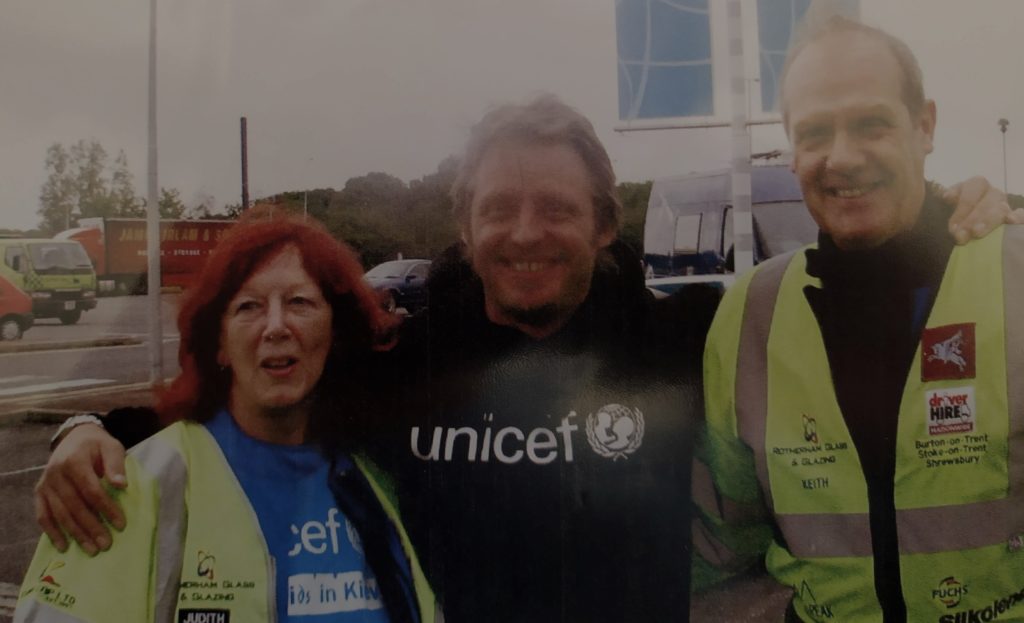 Here is a synopsis of the last SAM Club Night talk about UNICEF’s ‘Children of Chernobyl’ project. Keith and Judith Hopkins talked about their fundraising and 5,000-mile ride to the project.
“All children have a right to survive, thrive and fulfil their potential – to the benefit of a better world.” UNICEF
Introduction
Sometimes it doesn’t take much to spark biker’s with an idea to help a charity. A DVD, ‘Long Way Round’ with Charlie Boorman and Ewan McGregor,  seeded the idea for Judith and Keith Hopkins. The 5,000-mile ride would mark the 20th anniversary of the Chernobyl nuclear disaster. The UNICEF ‘Children of Chernobyl’ project featured on the DVD. You might remember the accident at the nuclear plant near Chernobyl, Ukraine. The nuclear plant was essential to power generation in Ukraine and USSR. It was badly maintained.  It had lax safety procedures. There was also a lack of accountability.  The disaster has had devastating effects on people’s lives. It has affected wildlife and large areas of land around the nuclear plant. Countries around the world have also been contaminated. The disaster left Ukraine citizens with a lasting legacy of illness, disability and social stigma. The sick children were socially shunned and labelled ‘Chernobolists’ or ‘Chernobyl Children’.
Background to the Chernobyl Disaster

On the 26th April, 1986 Unit 4 of the Chernobyl Nuclear Reactor exploded. It was the worst nuclear accident in history. The explosion released 90 times the amount of radioactivity as the Hiroshima bomb used in World War II. Whilst the fire raged people in the nearby town of Pripyat carried on their normal lives. State media reassured people there was nothing wrong. They bought contaminated food that they fed to their families. The children played in the open-air playgrounds. They chased each other through abandoned buildings. These were heavily contaminated by highly toxic radiation. The following day the population was evacuated to nearby towns. Some of these towns were also heavily contaminated by radiation. The people never returned to Pripyat and it has become a tourist attraction. A territory twice the size of the UK with 70 million people was contaminated. Highly radioactive fodder continued to be grown in this region. This was fed to livestock. The produce was distributed throughout Ukraine and the Soviet Union. Radioactive waste dumped on the ground leaked into the soil. It contaminated the water table, affecting drinking water for 35 million people. Parts of Kyiv are still contaminated with plutonium today. Even the smallest amount in the body can be fatal. Children are far more susceptible to the effects of radiation. They were found to have the highest doses in their bodies. This resulted in difficulty eating, sleeping, walking, hair loss and vomiting. Teachers watched whilst some children would spontaneously bleed. Thyroid cancers, damaged immune systems and kidney problems arose. There was a massive increase in childhood cancers, psychological and social problems. Children in Ukraine are still suffering 34 years later. These health problems are now compounded by an ongoing war with Russia.

Keith got an article published in the local newspaper. It requested 20 volunteer bikers to ride to Kyiv to deliver any funds raised. Each biker needed to raise a minimum of £1,000 and pay their own expenses for the trip.
The whole enterprise took 18 months and raised a final total of £55,000. Sponsorship came from individuals, hosting events and large and small local businesses. Tony Jefferies, owner of a family-run motorcycle business in Shipley, became a patron. Tony’s son, David, was a well-known TT rider in the 1960s/70s. Lyndsey Burgess, UNICEF representative, provided liaison with the Children’s Centre in Kiev.

Riding the Route to Kyiv & Back

UNICEF in Ukraine
UNICEF is funded by the voluntary contributions of indi­viduals, businesses, foundations and governments. The organisation has been in Ukraine since 1997. It has provided $130 million to develop clean water and sanitation, protection of children’s rights and education.

You can donate to the UNICEF Ukraine Children’s Project here

My thanks to Keith and Judith Hopkins for their invaluable help in putting this article together.

PrevPreviousCan you help with European Research?
NextInspire Ride 2020Next