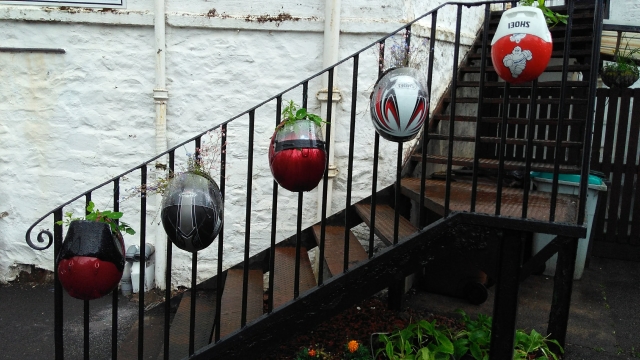 If you weren’t there, at the SAM Club night on Monday, you missed a very interesting talk from Steve Tucker. He is the co-author of ‘Advanced Rider Trainer – The Handbook for Training the Trainer’. A RoSPA examiner, he charted his journey from being a traffic policeman with the Metropolitan Police to setting up a RoSPA group in Cyprus. His journey, via a series of serendipitous events, took him from setting up a RosSPA group to writing a book on how advanced motorcycle trainers can better engage with their Associates; and, recognise and resolve the various riding problems encountered.

The next SAM Club Night is the CHRISTMAS PARTY! Julie (Manager, Treeton Miners Welfare Club) has the order for food. Janis (wife) has done a magnificent job of getting more raffle prizes for the same money as we spent last year. This gives everyone  a chance of going home with something for Christmas. So, make sure that you turn up and enjoy the FREE pre-Christmas celebration with all your SAM Club friends.

In your newsletter this week, Wales will enact 20mph speed limits in many urban areas. The purpose is to reduce pollution and is based on the idea that there are less emissions produced by ICEs (internal combustion engines) when accelerating to 20mph than 30mph. Of course this ignores the fact that goods and services delivered to the community will be much slower and take more time. They’ll be putting district nurses back on bicycles next.

Helping to reduce pollution are the ‘Just Stop Oil’ activities. They closed the M25 this week. Road users sat in their vehicles with the engines idling, thus delaying the delivery of goods and services that we all rely on. It didn’t stop motorcyclists who simply filtered through the holdup. Such a protest does nothing for the cause of arresting climate change, but the unrepresentative, hysterical protestors gathered a lot of animosity and got their personal five minutes of infamy.

Speaking of protests, the French Federation of Angry Bikers protested against the imposition of the EUs Motorcycle Technical Control (the EU MOT). President Macron has said that if enacted, it will never be actioned. It’s the French way of having to do things they don’t like.

If you are in a holdup, caused by anti-climate protesters or otherwise, would it be nice to have some refreshment on hand. Take a look at Mike Muller’s coffee stand for a nice business idea. It looks as if it could deliver more than coffee!

Onto more progressive riding, the Guiness World Record for relay motorcycle riding has just been broken – twice in one day! A SEAT 125 e-scooter, swapping batteries every hour and a team of 5 riders broke the longest distance ridden in 24-hours. Also, another first was Vanessa Ruck (‘Girl on a Bike’) who, after a serious motorcycle accident, overcame this major trauma to complete the epic 1000 dunas challenge on a standard production bike.

Lastly, our motorcycle adventure slot. This week it’s about a couple of guys who ride mopeds through South America. You can also read how to upcycle your old riding gear whenever you replace it. Happy reading.