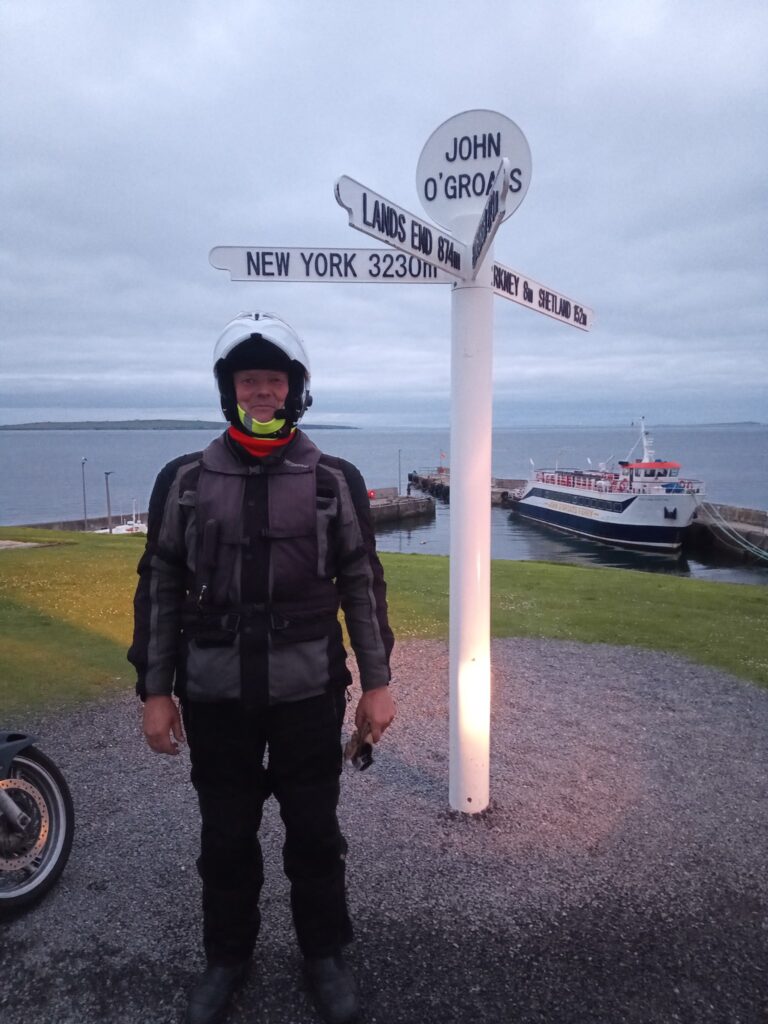 The Long Distance Up Challenge is now over. Leaving Land’s End at sunrise, 5.13am, Steve Bennett and 35 other riders set off on the 1000+ mile ride to John O’Groats. Due to an electrical fault, one bike failed to start the journey. One rider had a SMIDSY. All other riders made it to John O’Groats. Steve arrived with 8 minutes to spare before the sunrise deadline. Steve provided a live feed of his progress throughout the event. It just shows that a big bike with a big engine isn’t needed to ride further than you thought possible. The 10-year-old Piaggio MP3 400 had ‘rested’ in a shed and wouldn’t start. Its brakes were seized and the forks needed new seals. By the time that engineer Steve had finished it was very roadworthy and rideable. So the epic challenge was on and the rest as they say is history. By the time that Steve gets home he will have ridden an estimated 2,079 miles. You can still donate, just click here.

In other news this week you can read ‘Riding the Motorcycle Century’, a look back at how motorcycles have developed over the past 100 years. This is a timely article as we may soon have to remind ourselves of what we once had. Why? Because the UK Government, having removed the very generous subsidy from electric cars, is switching the focus to electric motorcycles. Well, it is cheaper, quicker to develop and manufacturing can be scaled up much more rapidly. They will be cheaper to run and easier to maintain with swappable battery technology. With most motorcycle manufacturers now developing their own models and new start-ups finding a ready market, this might be a rare winner for a government not known for its success in helping personal transport policies. The rise in electric bike sales will also help to swell the Chancellor’s coffers a little more.

Whilst most SAM members will stick with their fossil-fuelled machines for several decades yet, it might be worth watching ‘Secrets of a road tester’ on YouTube. It might help when looking at your next bike. There is also a good article on ‘Riding within your limits’. As several SAM members have pointed out, it would have been nice if the rider (perhaps a model) had worn full protective riding gear, rather than having no gloves and wearing trainers. These may have enhanced the attractiveness of the rider, but the NHS bill for a spill might be eye-watering.

It’s been ‘Ride to Work’ day this week and there have been lots of road safety groups/charities, including SAM, promoting P2Ws. After Steve’s epic adventure, I think we could also help to promote P3Ws too. A further development to support P2Ws/P3Ws is the signing of a memorandum of understanding between FEMA, FIM Europe and the UK’s NMC. These are bodies that advise governments of roles of motorcycles, motorcycling and motorcyclists in the UK and Europe. I just hope they talk to motorcyclists and local motorcycling groups before they talk to any of the regulatory authorities.

There is a very interesting YouTube video review of motorcycling airbags. It’s really worth taking a few minutes out of your busy day to watch it.

South York Police Off-Road Team have put out a reminder of the law and rules governing e-scooters. A recent survey of motorists found that many did not know common road signs and rules. I’m sure that Sam members can do a lot better.

Blood Bikes Manchester are looking for someone, or a business, to sponsor a change of livery on a donated BMW bike. You will notice that the ‘What’s On?’ section of the SAM Newsletter is missing. This has now been set up on the front page of the SAM |website. This keeps all information about activities/events, in both the Club and across our local community, in one place.

A VERY BIG thank you to all those SAM members who helped us by filling in the SAM Club’s members survey. Your ideas, criticisms and suggestions are all very welcomed. Debbie Fulton (SAM Committee) is collating the responses from the last SAM Club Night and email survey, so we’ll feed back the results soon. Being thinking bikers, you may have an idea or suggestion that has just popped into your head. You can still send any suggestions by contacting Debbie via the SAM Committee form on the Contact Page of the SAM website.  Until next week…

Send your suggestions on what you would like to see more of, or less of, in your Club using the SAM website Contact form. Thank you.

SAM Club members can find all the latest Club events on the website’s Calendar. Read, enjoy and share your Club’s newsletter with ALL your friends and family. Until next week stay healthy and ride safely.