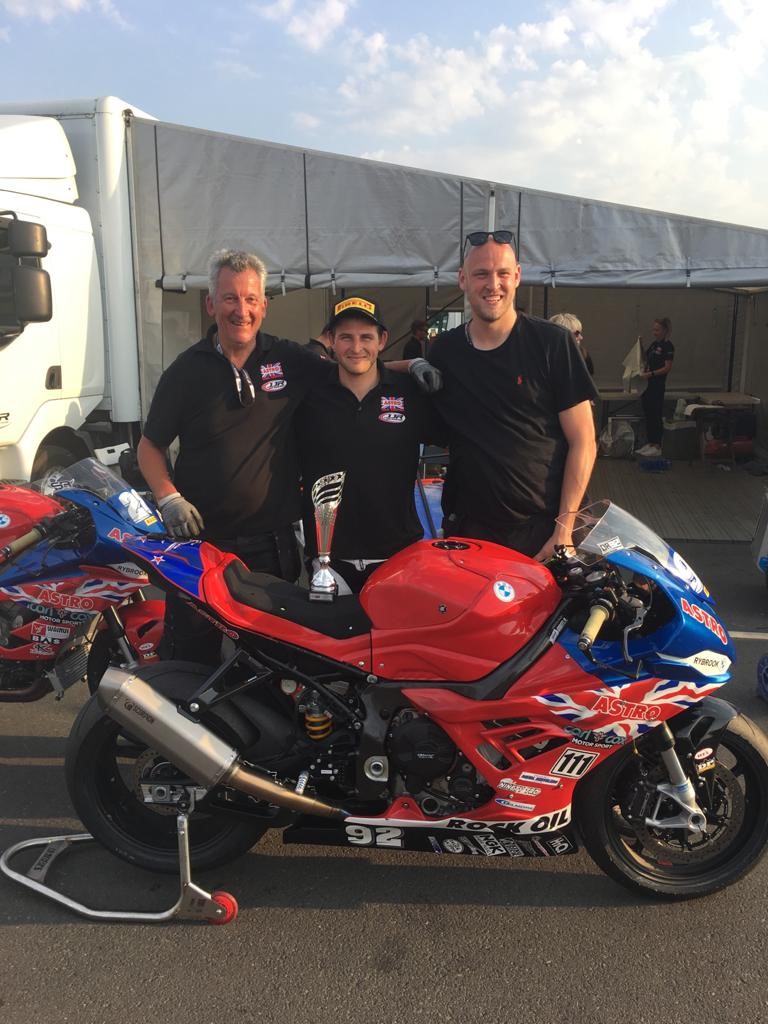 After the long wait, we finally got the boys out on track Friday for free practice 1 and 2, both the boys had a steady FP1 just getting to grips with the BMW1000RR and the new competitors in the field with Damo Rees (DR92) 7th and Shane Richardson (SR28) 17th out of a field of 46. FP2 not so good for SR28 he only managed 4 laps and had to pull in with a clutch issue. DR92 had a steady run around the circuit on old tyres finishing 12th. That evening we got to work on the SR28 machine and the problem was found to be a slightly bent shaft from an off during the previous week’s test.

Qualifying was at 10.00 am. Both boys were raring to get onto the track and show what they could do. They did exactly that! Both bikes went well with no issues. The DR92 finished 4th and SR28 finished 13th. Race 1 was at 17.15pm, so we had a really long wait to get on the grid. As the nerves began to build we headed down pit lane to greet the boys on the grid. I waited on P4 for DR92. The other team members waited on P13 for SR28. It was very strange to be on the starting grid without any crowd. Normally, the whole of the start-finish would be lined with eager race fans waiting for the spectacle of 46, 200+ horsepower bikes, to set off up for Redgate Corner; and, somehow get around the 1st bend. Both bikes rolled up to their starting position and we all wait for the hooter to clear the grid. The grid was cleared so that 46 bikes can do the sighting lap and line up for the race. As the revs rose, suddenly, the guy on pole position leaps from his bike and lays it down on the floor! It had stalled and he did not like the idea of being sat there as all the other bikes set off. He was wheeled off the grid and the bikes had to do another sighting lap. Eventually, the lights went out and they were off. Into the 1st corner, DR92 got a blistering start and initially lead the race. Further down the circuit, it was overtaken by a couple of the more experienced riders into Hollywood and down the Craner curves. He was steady in 4th until he started to get to understand the guys in front. Then he steadily closed the gap and finished a fantastic 2nd in his 1st ever race in the UK. Unfortunately, the gearbox issue came back to bite the SR28 bike and he had to retire after 4 laps. After all the celebrations were over, we headed back for what turned out to be a long evening for a full engine change to SR28 bike to cure any issues.

Sunday Warm-up and Race 2
Warm-up went well for both bikes. Under cloudy, damp skies, both bikes behaved as expected until we got them back to the awning. Without warning, a water hose on SR28 bike blew off, shooting scolding hot water across the garage. Fortunately, no one was in the firing line. The hose was replaced and both bikes prepped with new tyres ready for race 2. At 12.25 pm, we headed down to the grid. DR92 was 3rd on the grid and SR28 26th. After all the usual procedures, they were off. DR92 swapping and changing places up front with SR28 coming through the pack. Suddenly a red flag was shown. It turned out the hose on SR28 blew off again, instantly covering his back tyre in water. He had quite a big off, making quite a mess of the bike in the process. He was fine, just a little knocked about and stiff. The race had to be restarted with a “quick start” procedure. Only 1 mechanic per rider is allowed on the grid. All bikes got away well, until a fellow rider Richard Cooper high-sided and was hit with his own bike. This resulted in the race being abandoned until the end of the day 5.50 pm! What had looked like a nice early finish was now going to be a late one. The bonus was that if we could bet SR28 bike fixed he could start from the back of the grid. It was all hands to the pump. All the damaged parts were removed with everything else being washed and cleaned of gravel and grass. New parts were fitted and suspected parts replaced. New fairings were fitted and stickered up and both bikes were ready to go again. At 5.40 pm the boys head to the grid with all of us chasing after them with tyre warmers, tools and stands. DR92 on P3 and SR28 on P32 of the grid. The race was now shortened from 22 laps to 14 laps. The boys now had to go full out from the start. SR28 got a flying start getting past 6 other riders on the 1st lap and finished the race 16th. This was just outside the points. DR92 was again battling upfront and came home in 3rd place. Once again we were spraying the bubbly on the podium. That was us done for the weekend. A few downs but many ups for both riders. DR92 now is Joint 1st in the championship, which is not bad for a rookie rider from down under.

Now onto round 2 21st -23rd August at Snetterton
Once we get to know about spectators, probably at Oulton Park, 18th to 20th September, it would be very good to see a few familiar faces. The kettle is always on!