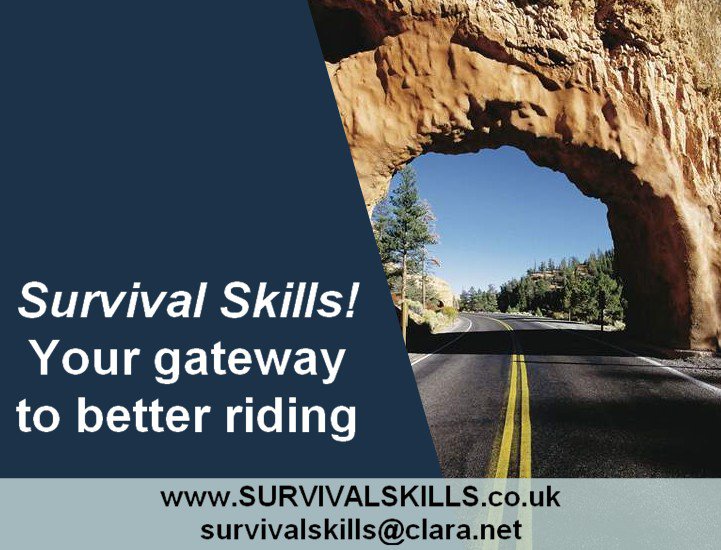 Welcome to the latest edition of the Survival Skills Rider Training newsletter, which is now going out in Thursdays and will cover my Facebook posts from Thursday to Wednesday. Let me know if you find it more convenient – I really would be interested.

TRAINING – phew, wotta scorcha and all that! Of course, by the time you read this it’s likely that the extreme heat will already be fading from the east of the country, but thunderstorms aside, it’s a great time to book an on-road course from my Ride4Fun and Ride2Work range, and the long evenings mean we can train in the evenings too. I still have some availability for July and I’m taking bookings into August. REQUEST INFO or visit www.survivalskills.co.uk

And of course, I’m also available for ONLINE COACHING sessions immediately. You can access my NEW BOOKING PAGES for short 15 minute sessions and longer one hour sessions. To find out what’s on offer just click the links!

READ ONE THING – if you’re pushed for time, you really do need to know about the government’s action plan for ‘decarbonising transport’ – it means the end for petrol-driven bikes by 2035, and possibly even earlier. Read “The end is night – and it’s 2035”.

SCIENCE OF BEING SEEN – I was only after I’d set the date for July’s LIVE online Science Of Being Seen (SOBS) talk that there was a clash with the Euros football. As England ended up playing I’m offering you another chance to catch the presentation previously used as the third module at most Biker Down courses – IN FULL and UPDATED. Here’s the booking link:

Depending on interest, I’ll probably deliver SOBS every two months, with a talk on another biking topic every alternate month. And a thank you to everyone who looked in for the first. Feedback was overwhelmingly positive

ONLINE PRESENTATIONS – I have several dates in the diary for talks to CLUBS & GROUPS. If you’d like me to arrange something for your own, get in touch. As well as the ‘Science Of Being Seen’ and ‘Crash Course (as in “how not to…”) presentations, I have a selection of others on various riding issues.

Ko-Fi – is my online resource for the old Facebook articles. Right now, there are over 500 articles in total on the site. Sign up as a SUPPORTER from as little as £3!

Make a brew, grab a biscuit and pull up a chair ready to tune in to the ‘ELEVENSES’ LIVE webcast. Join me, Kevin … See more

*** TIPS ON TUESDAY *** “The vehicle ahead won’t stop instantly”

Years ago, there was a BBC TV series called “So You Think You’re a Good Driver”. The participants had been nominated by friends and family who thought they were anything but!

There was an experienced driver who struggled with parking. There was another who was convinced he could run his office from his car and see everything happening around him whilst on the phone; he missed spotting the alien ‘greys’ crossin… See more

As always when the sun’s out, there are a lot of bikers on the road as well as a lot of drivers, and so there are a lot of incidents. It’s always worth looking at how other people respond to descriptions of near-misses to see what we can learn to do better. And whilst we can learn to avoid the event itself, the responses also suggest many of us could do a job in learning to control our negativity.

One of the ultimat… See more

Make a brew, grab a biscuit and pull up a chair ready to tune in to the ‘ELEVENSES’ LIVE webcast. Join me, Kevin Williams, twice a week on Wednesda… See more

Riding a bike is fun. Riding round bends is even more fun. So no surprise motorcyclists tend to flock to the twisty roads. But however much fun we are having, we should never lose sight of that fact that every single bend is a hazard – it forces us to change direction, probably speed too and thus poses a risk if we get it wrong.

Unfortunately, many riders underestimate the risk bends pose. Because we ride for so … See more

With apologies to Elvis, it seemed like a good way to start a mini-rant about the EU’s three tier licence system, and the way that the UK implemented it with three tiers of tests.

It was and remains – in my opinion – a huge step backwards.… See more

The government yesterday released their action plan “Decarbonising transport: a better, greener Britain”. And for the first time it sets a date for the phasing out of petrol driven motorcycles.

THAT’S IT FOR THIS WEEK – so finally SHARE THE NEWS!

Please Please PLEASE pass on the newsletter to biking family and friends. Let’s get everyone we know ‘better biking’.